I do like the Human Evolution chart John Hawks mentioned in Twitter that he is working on at the mo! 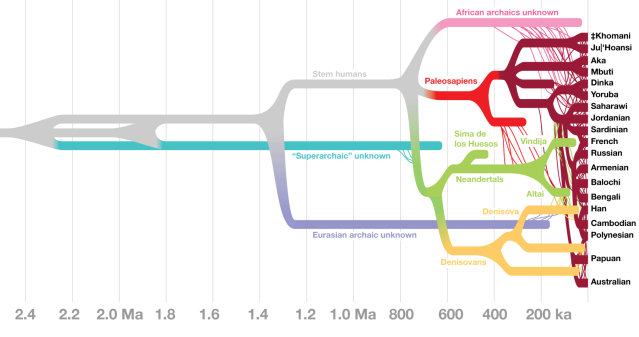 All over it are pointers to interesting issues. Where to start? Well, in the middle is a red dead-end finger with tendrils reaching down from an extinct branch of early modern people, into the Neanderthals. That is a record of our failed -or not completely failed- attempts to invade Europe and western Asia from Africa. Our eventual successful attempt was about 60,000 years ago but by then our maternal line had succeeded in replacing the original Neanderthal mitochondria! That’s actually where the vast majority of DNA material is, in the cell! (But it’s repeated versions of the same small stretch. The vast majority of the information content is in the nucleus.) The origins of that event were long before 200,000 years ago. The recently-in-the-press modern-type skull from Petralona, Greece, long before 60,000ya was not a one-off invader, and it can’t have been the earliest. (Not to be confused with another famous Petralona skull thought to be Homo heidelbergensis.) We know what the original Neanderthal mitochondrial DNA was, from the Spanish cave deposits in Sima de los Huesos (aptly, “cave of bones”). There are at least two caves there, and I must write up a summary of the differences to help me to remember them. The place on the tree apparently held by Sima de los Huesos is nicely shown on the chart. It used to be considered Heidelberg man, and H. h. was supposed to be the common ancestor of us and Neanderthals, but, as shown on the chart, the age of the split between us and the Neanderthals, and indeed between them and the Denisovans, was before the Heidelberg fossils themselves (not shown on the chart, but which was no more than 700k years ago, which was before all but the possibly earliest data of any heidelbergensis-attributed fossil, apparently in an Atapuerca site, which is where Sima de los Huesos is.)

Next, despite the proliferation of connections, there is one category that is absent: evidence of interbreeding between moderns and very archaic types. The African archaics shown at the top, which led strongly into current African populations, apparently after the ex-Africans left, are shown as no more archaic than the Neanderthals (though they contributed up to 19% of some contemporary populations, six to fifteen times that contributed by Neanderthals). The mauve line near the bottom interacted directly only with the Denisovans, and the turquoise “Superarchaic” only interacted with the “Neandisovans”. It’s beginning to look like by the time of the final, successful excursion from Africa 50-70kya, the true ancients elsewhere had already had done to them by the Neanderthals and Denisovans, what we would end up doing to those two.

In fact, at the left end of the chart, some splittings and re-mergings seem to suggest that an inter-breedable species extended back to 2.3 million years ago, thanks to the contributions at the left end of the Superarchaics. This does not mean that all the human-ish types we know of from fossils, around at the time, could interbreed, but it does mean we can’t be sure they couldn’t. But that earliest divergence point is actually the date of the first fossils named “Homo”. Not all those fossils named Homo have to be part of the inter-breedable tree, and some may have diverged some time before. But it does look like Homo erectus, from a bit short of two million years ago, and it’s immediate ancestor, whatever or wherever that was, can reasonably be called Homo/human. The Superarchaic will be seen by many as Homo erectus, however much integrity that concept actually has or lacks. But so will the grey link between 1.8 and 1.4 million years.

The intriguing “early erectus” remains from Dmanisi, Georgia, between the Black Sea and the Caspian sea, may throw light on the split-then-re-merge at the left, between 2.3 and 1.9 million years ago. That is exactly what I would expect if a significant “Pre human” group left Africa, evolved significantly elsewhere, then re-invaded Africa. I’m not sure yet though if that feature of the chart is based on data or is an imaginative flourish.

Does this chart help us match up intriguing “primitive” fossils from Africa (Homo naledi) and East Asia (Homo floresiensis and others from e.g. the Phillipines)? Does naledi, from about 300,000 years ago, match up with “African archaics unknown” in pink at the top? No. It’s too primitive and has too many resemblances to types near the left-end junction, though it is possible those are reversals suitable for exploiting trees. But naledi‘s probably a third type knocking around in Africa a third to a half a million years ago. It may well be somewhat hybridised though. Also it was in Southern Africa, not West Africa where the “African archaics unkown” left their genetic markers.

So it looks like naledi and floresiensis are not part of the chart. The chart actually only includes types and lineages inferred genetically, or known genetically and from identifiable fossils, and no DNA has yet come from naledi or floresiensis.

Finally, the chart shows the first Australians splitting off before 100,000 years ago. I’m not at all sure that’s right. Maybe it’s to do with there not being much room at that end of the chart. I think a log time scale would help here!

This entry was posted in Uncategorized. Bookmark the permalink.