Quentin Cooper, His Leaving, and Did He Read My Book? 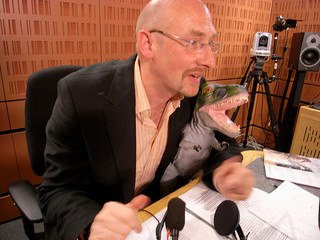 1. Was he sacked as such or was it all incidental to some other change?

1. On his last edition of Material Wolrd yesterday, he said he enjoyed every minute of his time on the programme except for about 12 minutes. That means he was sacked. That was pretty well the only indication I think, since he’d been on it since 1999, and he’s being replaced by someone younger… and the programme’s changing in some kind of way, though not a very big way it seems. And, Jenni Murray for example, has been presenting her show since before 1999.

2. It matters to me for one thing because in the space of a very few weeks, he mentioned a few phrases on the programme which I’d mentioned in my book – and readers of my book are a very select group!:

He referred to the BBC website as “vasty”, and I’d described the internet as that in my book;

He reversed “rats” into “star[s]”, whereas I’d reversed “smart” into “trams” in the book;

He’d said “Good luck with that” about something, as I had (though on its own it’s not much, though it’s far less commonly said that it was a few years ago.)

It’s great fun to read or hear the words of a well-known person and try to guess whether something you’d written might be influencing them, and usually it won’t be of course, but this is one ocasion where I’m going to guess yes. I now suspect many more things might have made the book interesting for him than I knew of a couple of days ago. One thing he would have liked I suppose, was identifying him along with Adam Hart Davis as two of the better science presenters, and maybe someone told him this and drew him to the book. But I also discovered this week that he is very keen on films – had been a film correspondent – and I’d accidentally, and then intentionally, included a number of film references.

I was also very surprised to discover the similarity of his background to mine: he’d done psychology and AI at Edinburgh. Those are my subjects, though I’d been at Sussex, and a bit earlier, and elsewhere too, later. No wonder I was always in chime with his approach to things! (Adam Hart Davis isn’t a psychologist himself, though his wife is, so just maybe that’s got something to do with why he seems good to me.)

I was wondering, and indeed worrying, whether his leaving had anything to do with me. Was he trying to push some of my ideas? Well, someone’s got to eventually, but let’s hope me worrying about that is like a kid worrying whether he’s the cause of his parent’s divorce.

3. It matters generally because he was so good, yet was disapproved of – after being very approved of for a long time, of course! – by someone at the BBC. That’s not good for the BBC or its listeners/licence fee payers. Why did it disapprove?

It’s also annoying that he won’t be doing the programme of course. However, I’ve no doubt he will be BBC’ing in other ways, and in any case, in the extremely unlikely event that he won’t, he’ll be doing other media work… and if he won’t be doing that, he can do public lectures. I’d been hoping to have him as an early guest on the Sciencepolice Café I’m starting soon, but I now realise he can command rather high appearance fees.

Anyway, it seems likely he will prove to have been the high water mark of science presenting, certainly in a news show, though if it turns out he wasn’t the high point – so much the better!

Some people made an effort, as soon as they heard of his impending departure, to get the BBC to keep him there (see url in photo above), but there was rather less support than I expected, and much less than he deserved.

Update: I’ve started listening to the new programme, and find I’m pleasantly pleased. But note this. The new presenter is no more fun than Quentin was, but he is “relaxing” rather than “entertaining”. Overall, absolutely fine for me. However, the programme format is I think an improvement. In truth, interviewing ordinary non-media-savvy scientists live was a bit of a grind. I’m sure there is editing now, but whatever, there’s definitely less of the idiotic starting of replies with “so”. Quentin didn’t mind it but I’m fairly sure the BBC people have been told not to do it, and maybe it’s also been edited out. Exactly how the editing is done is a bit of a mystery to me, since the 30 minute shortened versions of “In Our Time” seldom seem to show places where they’ve been edited down from 45 mins, even when I’ve listened to both versions. However, the sound effects and editing offered by the new format are worthwhile, though I daresay more expensive; and it still seems a little unfair to leave Quentin out when he’d been asked to trot so quick for so many years!

This entry was posted in Uncategorized and tagged AI at Edinburgh, book, Material World, Quentin Cooper, The Secret Dinobird Story. Bookmark the permalink.

4 Responses to Quentin Cooper, His Leaving, and Did He Read My Book?