Some years ago I decided to prepare for being an Old Person: National Trust; Bridge; Gardens. I soon realised I wasn’t going to do any better at being an Old Person than I had at being a teenager, so I dropped the pretence, but a link with the past took me to “ the National Trust property Tredegar House” last week. It seems it’s only been open as an NT property since last year. 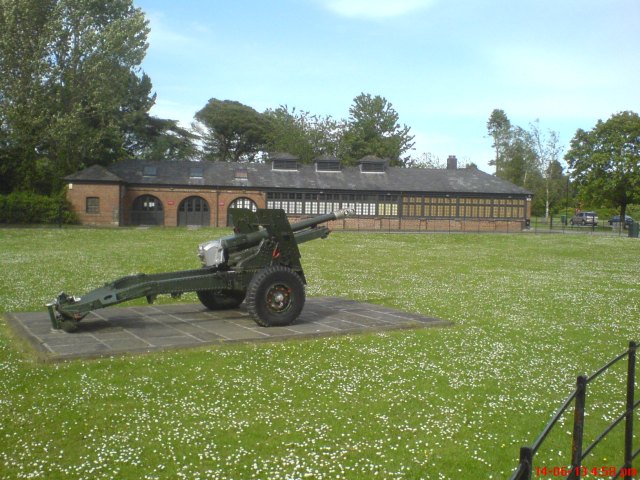 25-Pounder at Tredegar House. It’s said we lost 700 of these in France in 1940. I wonder what the Germans did with them!

As we enter the grounds, we notice the use made of a 25-Pounder, to give poise and direction to a vista. We had one of these at school in the corner of the quad, where it performed the same duty. Perhaps I’ll eventually find room for one in my garden? 😉

National Trust people are terribly sweet, both visitors and guides. For some people it really is their natural habitat. I like to include people such as them in photos of buildings. They make very apt self-propelled ornaments. 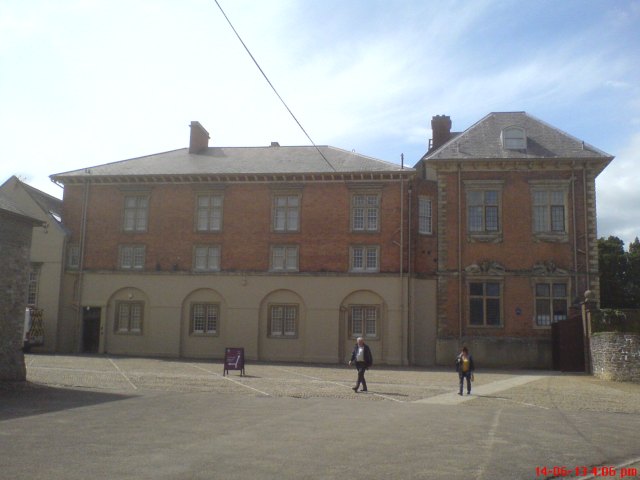 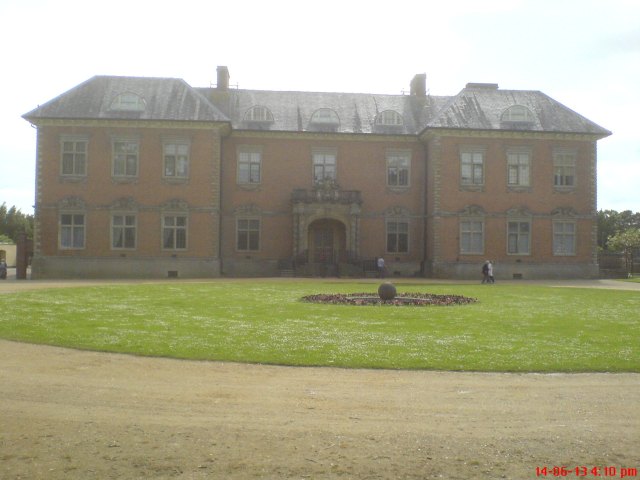 The family at Tregedar first came into money through an inspired series of judicious marriages. Much later they made a fortune from the coal they discovered underlying their land, but their line died out after the war, one of the last being Evan Morgan, a splendid character in many senses. He kept a menagerie, not just on the grounds, but to some extent in the house too. He had a grizzly bear in the basement. He had parrots, one of which he taught to swear appallingly, and another which he trained to walk up his trouser leg and emerge from his flies. Despite this, and being gay, he had two wives, one a Russian princess. (Come to think of it though, I remember staying at a guest house in Birmingham where the owner had kept a bear and parrots on the premises. I was too late for the bear – and the lion – but the parrot was certainly scary.)

He disliked his father, and became a catholic to annoy him. He was already horribly into black magic, though I don’t know whether this was after his father’s time, or he didn’t think it annoying enough. His father had some splendid motor yachts, and mistresses. I believe pleasure boats and mistresses do go together, and have traditionally done so. His mother liked to make big nests and sit in them, on top of porcelain eggs. She also had a special bird’s beak made for this purpose.

It’s good inside. There are ghosts, I was assured, but this was a pleasant old lady visitor whom I chatted up, trying to get out of the way of my photo but only succeeding in making it all the nicer. I particularly like the “All Sorts Of Seeds” drawer. 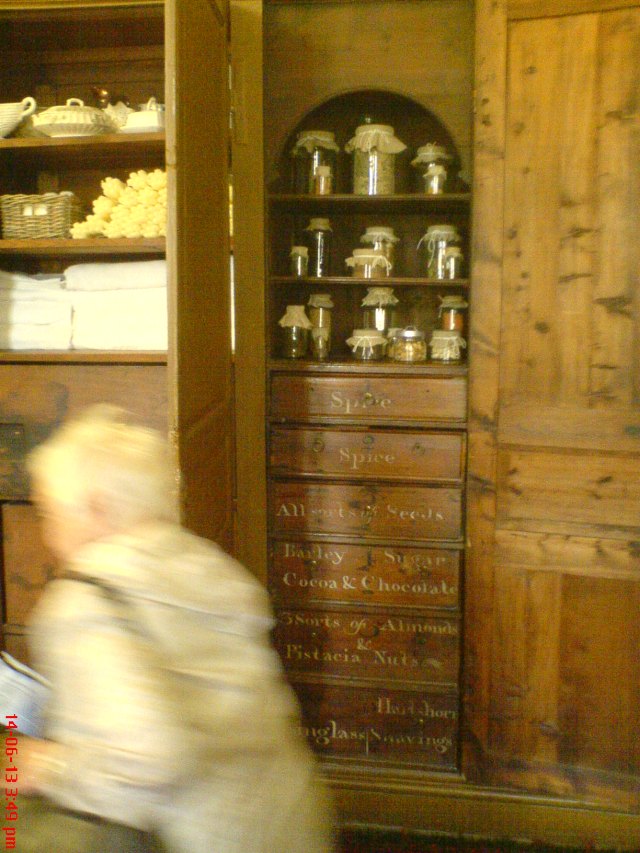 In the kitchen at Tredegar House

I started to experience a kind of culture shock, where I suddenly realised everyone in the house, masters and servants alike, must have hated it. Even the masters seemed to try to do the most bizarre things, perhaps to get away from life inside the house.

A glimpse or two at what it meant to be a mistress: 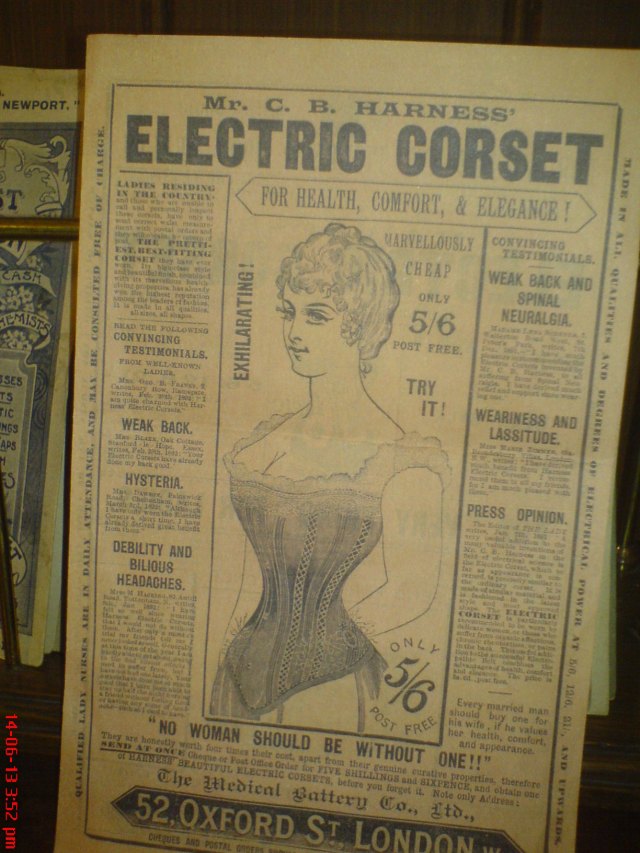 Oh Mr. Harness – yes, what a Good Idea for Health, Comfort and Elegance! Indeed, as time has borne out, eventually, no woman was without one.

One family member survived the Charge of the Light Brigade, and the house has a splendid pictorial reconstruction or two. His horse survived too, and has a splendid memorial in the grounds.

There is one picture of a fairly cherubic youngster of the family, perhaps around the start of his teens. He grew up to be Captain Morgan, the notorious pirate – perhaps even the most notorious pirate (after Drake, of course). Also, Governor of Jamaica. The family name was Morgan, as is very common in Gla-morgan and the surrounding counties.

Some nice pencil drawings on the stairs:

Drawing of H. G. Wells at Tredegar House. It is said he smelled of wild strawberries. 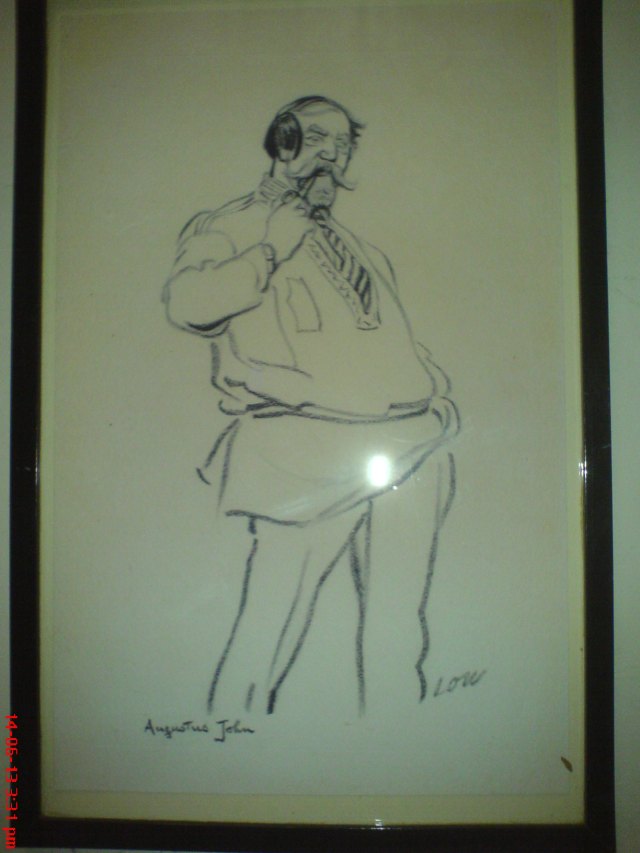 Drawing of Augustus John at Tredegar House. There was one painting there which suggested “Augustus John” to me (though I’m not knowledgeable on such). It wasn’t by him but another was, and apparently he and the subject are supposed to have had an affair. I wouldn’t have expected any less!

Drawing of Aldous Huxley at Tredegar House. Interesting to see one of him when so young. 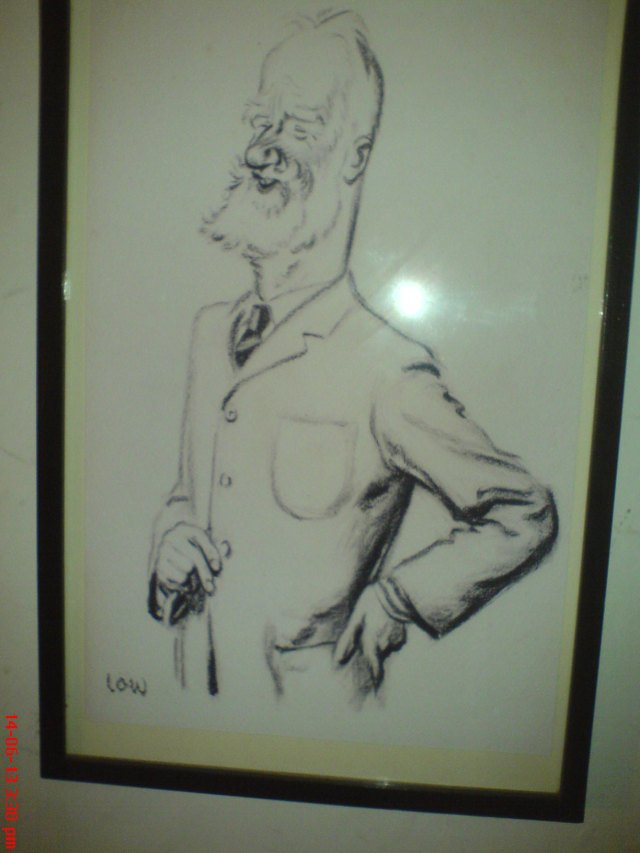 There is a table top for playing shove ha’penny made from a single peice of wood about a yard wide and four inches thick, now 42 feet long, but during the civil war, about 20 feet was sawn off one end for firewood.

I was lucky to meet Annie Parker, prominent in the Friends of Tredegar“, who had been at the house as a pupil, in the years when it had been a girls’ school. She agreed that watching the Harry Potter films was very reminiscent for her.

On the ever more worrying hunt for the way out, we view the house through the trees across the large fishpond, or, as I would call it, lake. Because the water level is so well controlled, you can lie on the bank and hold the camera phone just a couple of inches above the water, giving a duck’s-eye-view. Getting the picture at all without dropping it in the water was as much as I could manage, and here we see my standard trademark of wonky horizon. 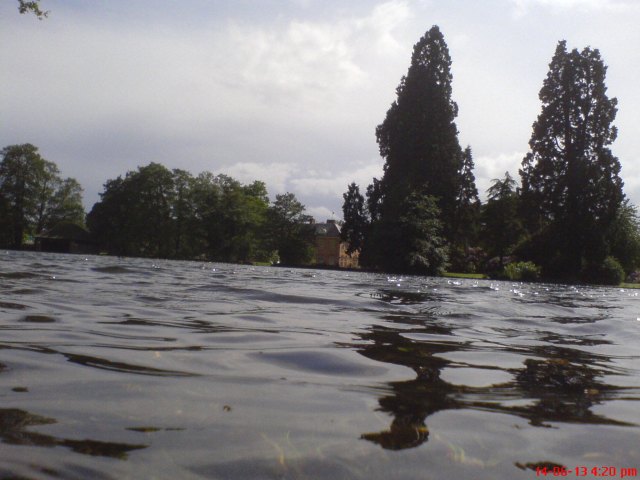 Tredegar House from the fish pond.

This tree, possibly a sweet chestnut, must be nearly 30 feet round at the base: 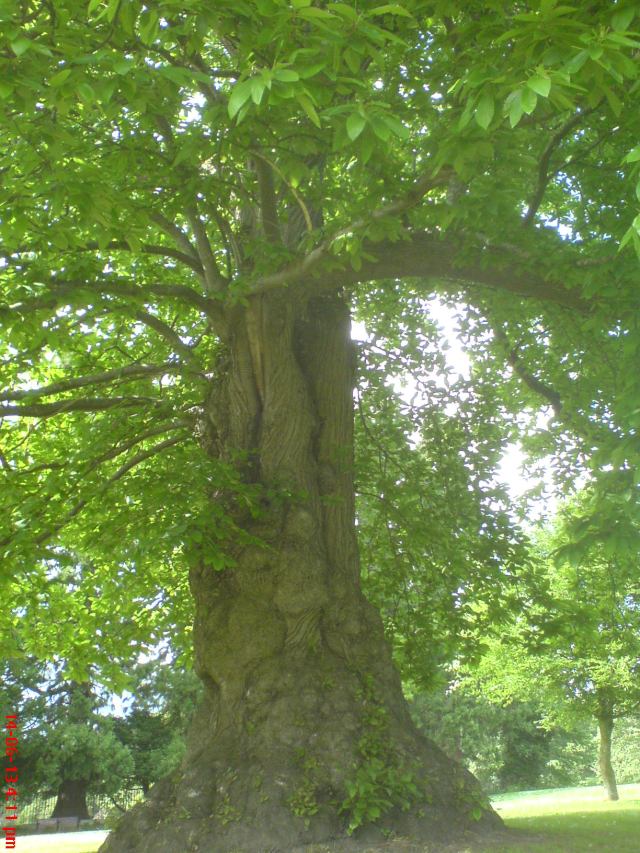 This house wasn’t enough for the family: they also had a small castle about seven miles away for holding relatives of a more peripheral nature. The woods around that had slight clearings and paths made, which I think were called “lights”. There were similar paths around Tredegar House, through a mini-forest of Wellingtonia/sequioa/redwoods/whatever. One appeared to have two trunks emerging from a single ground-level bole: 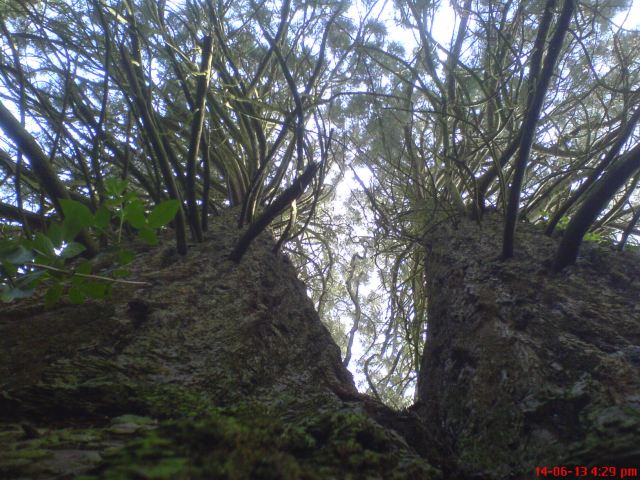 On one tree, a fledgling nuthatch was clamouring successfully to be fed by a parent. After a while, some of the trees seemed to take on human features:

Finally we reach the exit, where what appears to be a blue tit flies out of the 15mm wide exit of an ashtray. And on the ashtray these words appear: